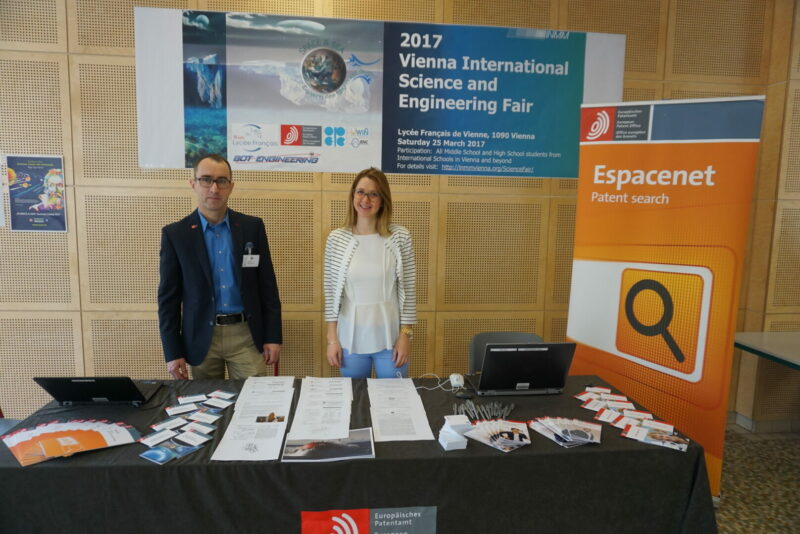 International experience: From an Erasmus exchange in Lisbon to a traineeship program in Vienna

Students at SEB LU have many opportunities to step out of their comfort zone and risen their horizons outside their home countries. International Office is constantly seeking for new partnerships to enable students to have a world-wide experience. Erasmus exchange programs, Bilateral exchanges, Erasmus + internships and Summer schools offer a variety of possibilities to cross the border. Our former student Jana Benedik took a chance and went on a four-year journey through Europe – all the way from an Erasmus exchange in Lisbon, start-up experience in Berlin to a traineeship program at the European Patent Office in Vienna.

Why did you decide to go abroad in the first place?

I always had a wish to go abroad. Since I was a little kid, I dreamed of studying and working in a big city. But for a very long time I did not have the courage to make the final step – apply for an Erasmus exchange. So, I was in my second year of master’s degree when it hit me, that if I want to go abroad this is my last chance. I applied for an Erasmus exchange in Lisbon – a city with a lot of sun and good food. It was scary at first, of course. But already the second day I realized I made the right decision – you meet a lot of people from all around the world, the thrill of a new city hits you, you feel adventurous and most importantly you have to show your independence and self-confidence. Half a year passed, and I didn’t want to leave, so I extended my stay and decided to continue my professional and personal path abroad. First, I experienced Berlin – working in a start-up – and then Vienna, where I had the chance to work for the European Patent Office. As you can imagine it’s a big difference, but I learned a lot in both places. A lot of people were asking me how can you change a start-up scene for a rigid institution. Well, I had to be a part of both to see where I want to go next.

How did you hear about the possibility to go to the European Patent Office and what made you apply for the position?

After my experience in Berlin I decided to go travel to South East Asia, which was another confirmation that I want to stay abroad for a little longer. So, I started to look for internships as well as jobs in Germany. At that time, I was also still subscribed for the news from the Career center at SEB LU. And honestly, that is also how I heard about the Pan European Traineeship at EPO in Munich. I applied immediately – as I said I was ready for another international experience and their offer attracted me. I had to send quite a lot of documents including my CV, motivational letter, copy of my diploma and grades as well as proof of English proficiency.

They were offering traineeships in various sectors and departments – from engineering, chemistry, data analysis, law to international business, HR and marketing. Since I had business background and marketing experience, they offered me a position in the marketing department in Vienna. Vienna was not my first choice, but I said yes!

Since the European Patent Office is an institution for granting patents, what do you even do in the Marketing department and what was your role?

Well yes, many people think that European Patent Office is just the institution that gets a lot of money for granting patents. But EPO is so much more! It helps entrepreneurs and organizations to innovate and analyse their competition. They created various databases and portals where all the patents are stored. One can also do a lot of analysis and predictions about the future of technology, pharmacy or any other field. I was in the department where we promoted the use of these databases with the aim to foster innovation and save time on new inventions. There are more than 110 million patent documents available to be used as a first building block for something new – but a lot of people don’t know that and hence lose a lot of time inventing that block by themselves.

My role was to prepare the marketing plan, support the team with new ideas, promote the EPO at various events, write article drafts as well as support my mentor on different projects concerning Intellectual Property. Don’t get me wrong, I had no idea about IP before – I learned everything there.

You mentioned you were supporting your mentor on different projects. Does that mean that you had your own mentor and how did the mentorship look like?

Yes, that is right! Each trainee is assigned to one mentor who helps to guide you through your work and introduction to the EPO. They really put effort in making you feel welcomed and integrated in the work of the institution. Before starting my daily routine in Vienna, I was invited for a three-day introduction program where I met all other trainees and was presented with the bigger picture of the EPO. It was like a teambuilding event – a lot of new information but also a lot of fun.

In the first month I had a lot of workshops with my co-workers from different fields of expertise – I had to learn everything about the Intellectual Property from scratch. Throughout my traineeship I constantly received feedback from my mentor and had full support. It turned out I even had two mentors since I joined some projects managed by another colleague. They both were of a great help and I learned a lot from them. There was no question I could not ask them, even if it concerned personal life. I guess that is what means a real mentorship, which sometimes lacks in some organizations.

It seems like you learned a lot, not only in your professional but also personal life. In general, what did you like most about your experience at the EPO?

Internationality. Not only I lived in another country, but all my co-workers came from different countries – Germany, the Netherlands, England, Spain, Austria, and even one from Slovenia. It really opens your horizons and changes your mindset; you hear a lot of interesting stories and you are able to learn to work with people with different working habits. There are three formal languages at the EPO – English, German and French – but all the documents are written in English. Since I had a wish to improve my German, I asked my mentor to speak German with me, so we did! They also paid an intensive language course for me.

I also really liked the way they guide you through your traineeship and have the intention to transfer the knowledge and wisdom to you. If you are self-initiative you can be a part of a lot of projects, but they won’t just turn up in front of your door. So be proactive!

What would you suggest to your twenty-year-old self?

Probably to get international experience sooner. During my studies I was accepted to go to an exchange program in Canada, but I was too afraid to do it. As much as it looks scary it gives you a lot – maturity included. Also, to be more curious and not spend so much time behind the books. I am not saying you should not finish your studies but try to gain experience outside the walls of the school as well. Work on different projects, join different interest groups, learn new languages, travel and ask a lot of questions!

Join Alumni SEB LU and stay in touch with your classmates, colleague and the faculty.